The Celts: unpicking the mystery

Swathed in myths and legends, the Celts – far from being a singular mass of ‘barbarians’ – were made up of diverse, distinct groups who battled numerous threats, from the Romans to the Normans.

Here, historian Martin Wall unpicks who the Celtic peoples were and introduces some of the key individuals who led the battle for Celtic Britain… 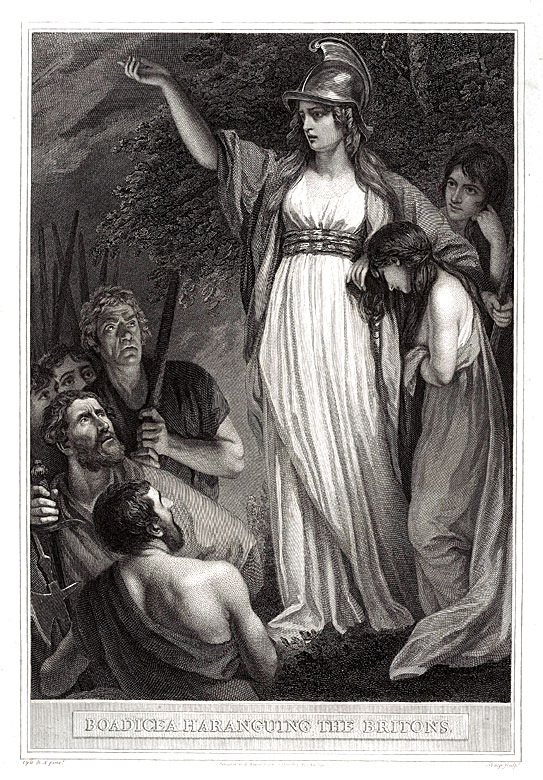 When Greek explorer Pytheas of Massalia made a voyage of exploration to Britain over 300 years before Christ, he called the native peoples Pretanike or ‘the people of the designs’ because of the crazy patterns that warriors painted on their skin. Pretanike or Pretani morphed into ‘Britannia’ or Britain.

These early Britons and their neighbours in Ireland all spoke some form of Celtic language by the fifth century BC. Their religious beliefs, their gods and goddesses, laws and military methods, technology and art were common to all Celtic peoples, whose settlements extended from Galatia in modern Turkey, through central and Western Europe and the British Isles, all the way to Celt-Iberia constituting Spain and Portugal. But the Celts were intensely independent and tribal. Even within Britain, a host of separate and distinct tribes zealously guarded their ancestral territories, ruled by kings whose ultimate legitimacy was based on divine descent. The priest-magicians who guided these kings and their tribal peoples, the Druids, were described by Julius Caesar as having originated in Britain.

Not all Britons lived in ‘Britain’, however. Britons occupied territories in an arc from central Scotland all the way to the Loire Valley in France. As a result of the Anglo-Saxon invasions in the fifth century AD, many Britons were forced to emigrate, some to Armorica (modern Brittany), which is still named after them; others went to Britonia in north-west Spain.

What made a Celt?

The matter of how each wave of Celts was united and divided by both language and religion is one of lively debate.

languages were broadly similar. But no ‘Briton’ thought of themselves as ‘Celtic’ or ‘British’. Their loyalty and kinship connections were to the clan, the tribe – so they were of the Iceni tribe, or the Cornovii or the Catuvellauni, first and foremost. In recent years, revisionist historians have sought to dismiss the traditional account of Celtic settlement, and indeed to ‘dis-invest’ the Celts as an authentic ethnicity with its own distinctive culture.

Though I take note of current fashionable theories regarding each ‘wave’ of Celtic arrivals in Britain, I have not strayed very far from the traditional view, which was that three waves of Celtic immigrants from the continent arrived, commencing around 900 BC. The first wave, were called Goidels or Gaels. They pronounced the letter ‘Q’ as ‘qu’ or ‘cu’, whereas a secondary wave of Britons pronounced it as ‘p’ or ‘b’. This linguistic difference has long been cited by philologists as the best evidence for distinct waves of immigration, some centuries apart. Finally, about 50 years before the Roman invasions, a tribe called the Belgae or ‘boastful ones’ arrived, and established control over much of the south-east. They had been displaced in their turn by movements among Germanic tribes and by the onset of a much more dangerous threat: Rome. 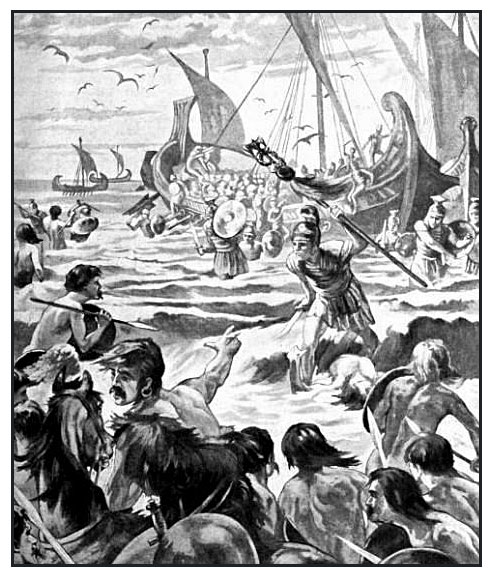 A depiction of Julius Caesar’s invasion of Britain in 55 BC.

The Celts at war

The first, very formidable threat was Rome. The Roman seizure of the Carthaginian colonies in Celt-Iberia (modern day Spain and Portugal) and Caesar’s wars in Gaul, brought them to the threshold of Britain. Two brief but lively incursions by Caesar in 55 and 54 BC had forced the southern tribes to capitulate, but it was to be almost a century before a permanent Roman presence was established in 43 AD. The campaign to subdue and colonise Britain was savage and prolonged.

The first great hero of the British Celts, Caratacus, fought an epic war for nine years between 43 and 52 AD against the full might of the empire. A few years later between 60 and 61 AD, Boudica, queen of the Iceni tribe, led a spectacular and brutal revolt which came within an ace of dislodging the Romans from Britain and wiping out the colony.

The Romans gradually established control over what is now England and Wales, and pushed into the Scottish Highlands, but could never establish firm control even over the lowlands there. Even in northern Britain within the empire, there was a separate military administration based at York. Eventually, as the imperial system began to collapse, the unconquered Celtic tribes along with their Irish cousins, as well as Germanic pirates, burst in upon the undefended areas.

The Anglo-Saxons established their own kingdoms in the eastern part of the island, and epic wars took place between the small Celtic kingdoms and Northumbria, Mercia and Wessex. As these kingdoms constellated into England, desperate wars and political manoeuvring took place for centuries and Wales and Scotland emerged as nation states. These contests provided the material for the legend of King Arthur, ‘Old King Cole’ and many pseudo-historical or actual Celtic heroes. Viking raiding and settlement affected Wales, Ireland, Scotland, Cornwall and Brittany in much the same way as in the rest of Europe. Finally, the most formidable threat of all, the nemesis of the British Celts, arrived in the shape of the Norman invasion of England. Once they had established firm control of England, their wars of expansion against the Celtic nations commenced. 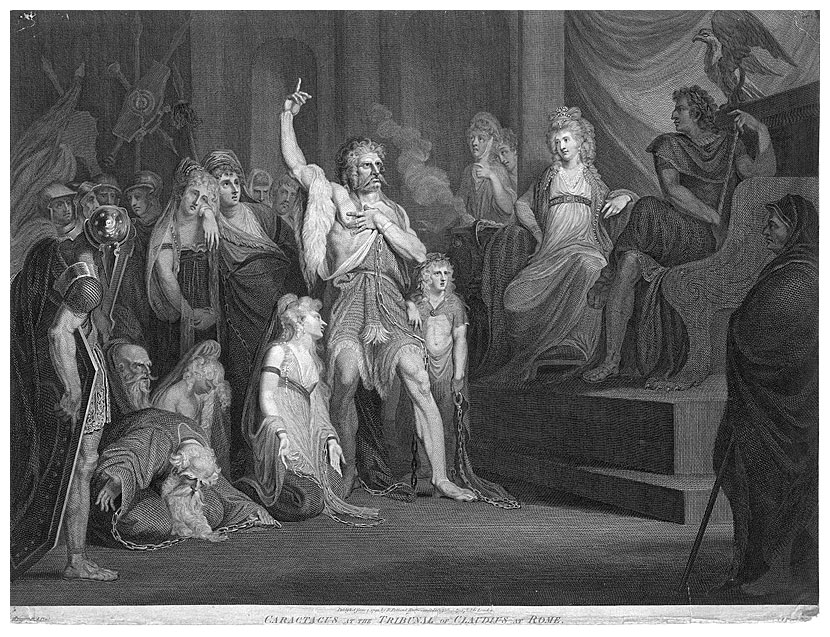 Caratacus, the first great hero of the British Celts.
(Andrew Birrell (after Henry Fuseli), Caractacus at the Tribunal of Claudius at Rome (1792))

Much of what we know about the Celts is derived from classical and especially Roman sources. While we should be naturally suspicious about accepting these portrayals, they were at least contemporary, or derived from eyewitness reports. The Romans had contempt for all ‘barbarian’ peoples, of which the Celts were one.

People who lived in the great forests of central Europe and Britain were considered ‘savages’, from the Latin silva (‘a wood’). All that was dark, shadowy and sinister was projected onto these ‘primitive’ peoples, and prurient, lurid stories propagated about their inhuman practices. The classical world of ancient Greece and Rome had been shocked to their core when Celtic hordes had sacked Delphi and then Rome itself. Greek philosopher Strabo said that “the whole race is madly fond of war, high-spirited and quick for battle”, and there is no reason to discount this opinion, especially in light of the abundant evidence of subsequent history.

In fact, the Celts were exuberant and extremist in all matters – their passion for war was no different from their passion for feasting, religious devotions, poetry and art. The Celts liked to show-off their wealth and status, and war gave the opportunity to display their fine horses, chariots, swords, golden torques and similar accoutrements. If they were not actually at war with external enemies or among themselves, then they would be composing bardic poetry about it, celebrating the ancestral heroes of the tribe. It may be true to say that there is a traditional martial eagerness in the Celtic temperament, but ultimately their military traditions were founded upon necessity. They had to either fight or be overwhelmed or exterminated.

The ‘island of the mighty’

While it is true that few peoples have become so romanticised and mythologised as the British Celts, I believe that the attempt to denigrate and marginalise their history is in danger of doing great violence to a body of knowledge which consists of far more than mere history or archaeology: the mythical lore which has become known as ‘the matter of Britain’.

The sovereignty of the British race within the ‘island of the mighty’ was exemplified by leaders whose chief attribute was their alleged descent from gods, or their personification of gods or goddesses. The Christianisation of this ancient mythical lore was the template for ‘the Quest for the Holy Grail’ and the Arthurian romances. These themes, reworked for the Anglo-Norman aristocracy, and encrusted around the Tudor dynasty which was of Welsh origins, became the legitimising propaganda for ‘the British Empire’.

Caratacus ‘the beloved one’ is perhaps the first of these, but Boudicca too was considered to be a personification of the goddess Andrasta. Arthur, the supreme hero of the British Celts, distils much of this into complex myth, which may or may not be based on an actual historical personage. Whether he existed or not, the fact of his existence in the imagination cannot be denied, but there are plenty of real-life Celtic heroes to make up for that: Urien of Rheged and his son, Owain; ‘King’ Cole or Coel; Maelgwn of Gwynedd; Cadwallon who almost reconquered the ‘Lost Lands’; Gruffydd ap Llywelyn and many more. The extraordinary, sad and glorious stories of the last years of Celtic resistance are reserved for Llywelyn ap Gruffydd, Prince of Wales and also called ‘the last’; Scotland’s hero, William Wallace (who had other Celtic connections); and ‘the son of prophesy’ himself, Owain Glyndwr. 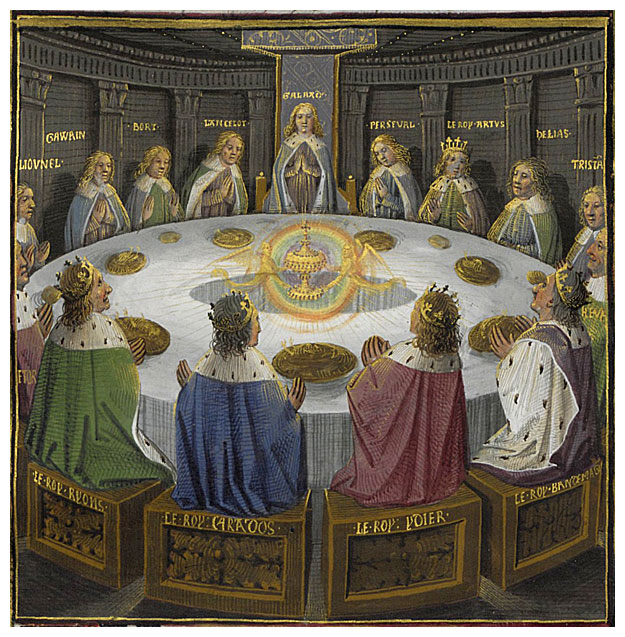 These contests between the Celtic kingdoms provided the material for the legend of King Arthur, says Martin Wall.
(The Round Table experiences a vision of the Holy Grail, an illumination by Évrard d’Espinques (c. 1475))

A legacy of this long battle for Celtic Britain was that it preserved a tradition, a pseudo-history or reinterpretation of history, which alleged continuity with ancient Rome, and legendary connections to ‘Brutus the Trojan’, the supposed first king of the Britons. These traditions, bowdlerised from the Brythonic originals, became a corpus of literature called ‘Bruts’ which encapsulated not only history and legend, but also, crucially, prophesy.

The so-called ‘matter of Britain’ was not conventional history, but magical. At first, the pure forms of these legends were confined to the Celts themselves, and inspired them to defend their lands, or rebel against foreign occupation. The ‘prophesies of Merlin’ promised that one day the Britons would be restored to the sovereignty of Britain. It was this desperate hope which kept alive a fanatical resistance for so many centuries. That struggle was ultimately doomed, but by an incredible twist of fate, the matter of Britain was taken up by the Tudor monarchs, to be reinvented as the British Empire.

The consequences of that were to be world-changing, but for the British Celts themselves, the irony was that they were the first victims of this ‘empire’.

Martin Wall is the author of Warriors and Kings: The 1,500-Year Battle for Celtic Britain (Amberley Publishing, 2017)

The Anglo-Saxon Age: The Birth of England by Martin Wall – Review

Book Excerpt: Warriors and Kings The 1500-Year Battle For Celtic Britain by...
Scroll to top